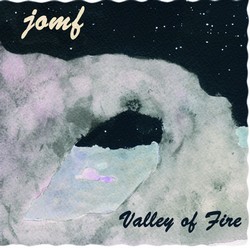 VALLEY OF FIRE contains 3 brand new finely crafted songs on side one, and on side two, a 20 minute classic psychedelic, dirt road journey.

The record represents two equally facinating aspects of jomf sonwriting, and musical arrangement. Over the years, jackie-o motherfucker have spent equal time writing and arranging classic merican folk and blues, and long, free-form compositions, drawing comparisons to 1960’s and 70’s ensembles like ASH RA TEMPLE, AMON DUL, AMM, FAUST, CAN, and THE CHICAGO ART ENSEMBLE, while at the same time, developing a song crafting style that has drawn on a musical language passed down through generations.

VALLEY OF FIRE begins with “sing” an original composition with vocals by Eva
Salens (inca ore) recorded in Charlottesville Virginia, written in collaboration with a local street preacher, the song addresses the importance of the individual voice, rising above a rotten political structure …LIFT UP YOUR VOICE AND SING….!

Track two, titled “valley of fire”, another jomf original composition, was recorded in leeds, england over the winter of 2006, with further production in portland by Adam Forkner.

Track three, is a jomf arrangement of a beach boys song called “the tree” from their lonesome and wasted record, “surf’s up”. Also recorded in leeds england, in the living room of lauren naylor, with further production in portland by adam forkner. It is an incredibly dark and minimal arrangement of the song, with an awesome vocal contribution from forkner.

Side two is a side long composition titled “we are” with vocals by eva salens and tom greenwood, and in typical jomf style, takes the listener on a lysergic ride through the misty atmosphere…

VALLEY OF FIRE picks up the trail of FLAGS OF THE SACRED HARP, and wanders down a similar path, adding elements of krautrock, and classic west-coast american production to create an incredible, original album.